Happy Release to The Cassidy Brothers!
I can’t wait for you to meet Aogán, Tristan & Donncha, three sexy Irish brothers. Each so sexy, so protective, so gorgeous in their individual ways.

Hope you love them as much as I do!

“…hot steamy chemistry sizzling between them all”

My foster father is a very bad man. I’m carrying a secret of his that could get me killed. So I head to the last place that ever felt like safety…

The childhood home of the Cassidy brothers.

Aogán, Tristan & Donncha were as much of my childhood as choc chip cookies and hopskotch. We used to roam like wildlings around their large country estate. I haven’t seen them since the accident that made me an orphan three years ago.

Boy, have they grown up. Tall, dark haired and eyes like the Galway Sea, with shoulders broad enough to keep me safe. Just like when we were kids, they shelter me. Care for me… Love me.

But how will they feel when they find out I’m in love with all of them? How will they deal with the terrible secret I’m carrying?

This is a sexy full-length reverse-harem contemporary romance with a HEA. Don’t read this novel if you can’t handle three Irish hotties fighting for their woman, fierce brotherly competition, and each laying claim to their woman in their own way.

“Don’t miss out on this great read”

Happy Release to Fighter’s Kiss!
Declan’s story has been a long time coming and I can’t wait for you to meet this beautiful broken Irish fighter!!!

Hope you love him as much as I do!

“Fighter’s Kiss shattered my heart into a million tiny pieces”

Declan “The Homewrecker” Gallagher.
World #1 MMA Champion.
Broad shoulders, perfect eight pack and the temper of a bull.
Still recovering from a car accident that broke his body.
Still married to the cheating supermodel bitch who broke his heart.

I can’t even begin to list all the reasons why getting close to him is a bad idea.
Or going to that fancy red carpet thing as his date.
Or letting him kiss me like he might never let me go.

Did I say bad idea?
Scratch that.

Keep reading for an exclusive excerpt…

To celebrate the release of Fighter’s Kiss I’m giving away so much good stuff on my Facebook Page. 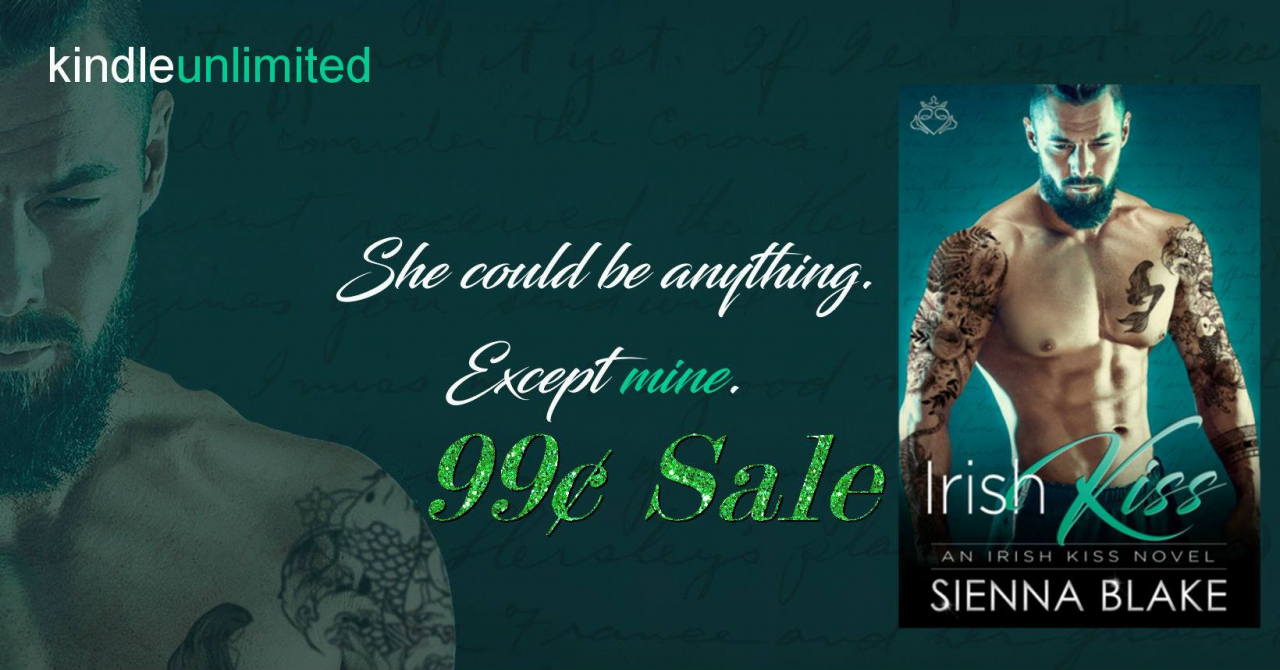 With Fighter’s Kiss (Irish Kiss #3) releasing next week, Irish Kiss is a 99c/99p countdown deal (in US and UK only, sorry)!

Thank you and enjoy!

“…Sienna’s best work yet. I LOVED the premise, the heart ripping angst, fat tears of grief and ultimately sobs of relief, all found in the pages of this immortal love story” ~ Book Bistro Blog

“If you loved All The Ugly & Wonderful Things…”

She’s my best friend. But she’s all kinds of wrong.
Daughter of Ireland’s most notorious drug dealer.
Thirteen years younger than me.
And barely legal.

Cause I’m so f**king in love with her.

“Fkfkfkfkfk. ADORED. I ABSOLUTELY ADORED THIS OMFG I AM CRYING!!!” ~ The Reader Blog

Happy Release to The Irish Lottery!
I can’t wait for you to meet these four sexy Irish brothers!!!

Hope you enjoy them! 😉

“Such a great book and an incredible message! ” ~ Amy Loves Reading Book Blog

Noah
Desperate times call for desperate measures. Our ma is sick and this lottery is the only way to raise that much money quickly.

But when my best friend in the whole world, the girl I’ve secretly loved for years, turns up as the winner I cannot believe it.

When I read the secret fantasy she’s submitted I almost choke.

This could be the very thing I need to convince her that we should be more than friends. I could give her what she wants—the sexiest night of her life…and more.

I just hope she’s happy when she finds out who’s behind the mask.

The Irish Lottery is a standalone friends-to-lovers contemporary romance.

Excerpt of The Irish Lottery

“I have an idea on how to raise the money for ma’s surgery.”

My three brothers blinked back at me from their various places around my living room. I’d called an emergency O’Sullivan brothers meeting and they’d all come in a flash.

I was the eldest. Michael was next, only a year younger. He and I look most like our da, with sandy-blond hair and strong square jaws, aquiline noses and high foreheads. My eyes were blue like our ma’s, while his were green. I kept my hair longer and as my ma always says, “unruly,” while Michael’s was cropped short and always styled. Michael ended up as legal counsel to some of Ireland’s richest men. Which was why he was sitting in my living room in a tailored pinstripe suit, having just left work.

Darren was next at twenty-three, two years younger than Michael. He’d always been the strong, silent type and good with his hands. He was still in his work overalls, a smudge of oil on his cheek, having come straight from his garage that specialized in motorbike repairs.

Eoin was the youngest. He and Darren looked like our ma and had her dark hair and thick lashes, except their eyes were green like da’s. He was lounging in one of my armchairs in his rugby sweats, blades of grass in his damp hair, so I knew he’d just come from practice. Eoin might only be twenty-one but he was a rising star in Irish rugby. He was getting a reputation off the field, too.

We were all so different in personality but we came together when it counted. I knew each one of these men had my back. I just hoped they’d agree with what I was about to propose…

“I’m going to sell tickets to a lottery,” I announced.

I was met with blank stares.

I barreled on before anyone could interrupt, outlining my plan. The blank looks turned to frowns.

“Hang on. Tickets to what now?” Michael spoke first.

“You mean…sexually?” Michael asked, his voice going higher than usual.

Darren let out a snort. “No, he’s going to play bridge with them. Of course, sexually, dipshite.”

“You’re going to whore yourself out?” Eoin asked, his wide jade eyes on me.

“That,” Eoin interrupted, “is fucking deadly. Getting paid to ride a hot rich chick…” He gyrated his hips.

I rolled my eyes. Trust Eoin to turn this into a joke. I grabbed one of the open bags of Tayto crisps so I could throw something at him.

Michael let out a snort. “It’d be more like some wrinkly old prune with cobwebs across her vag—”

I threw the cheese and onion crisp at Michael’s head instead.

He tried to catch it in his mouth and missed.

“So what if she’s old?” I said. “If I raise the money ma needs for this surgery…”

“Oh, shite,” Eoin said, his eyes widening as if he just thought of something. “What the feck is ma going to say?”

“I won’t tell her.” I hated keeping where the money came from a secret. But it was better this way. Who cared about a little white lie if it kept her alive?

“I’ll wear a mask on the promo shots and make the winner sign an NDA.”

“A non-disclosure agreement, doofus. Even I know that,” Darren said.

Eoin punched Darren in the arm, which kick-started a punch-off between them.

“You think you can sell enough tickets?” Michael asked me. He had a serious look on his face.

Out of the three of us, I figured he’d be the hardest to get on board with the plan. Even if he did get past the…controversial and extreme nature of the idea.

“I think so. I ran the numbers. If I sell each ticket for five euros, I’d only need to sell 50,000 to make enough to cover the operation.”

Michael’s eyes bulged out of his head. “Fifty thousand tickets? Where the fuck are you going to find fifty thousand women who are desperate enough to fork out five euros for a mere chance at winning you? I mean, yeah, you pull the chicks alright, or at least you did when you hadn’t been dick-dazed by Aubrey yet—”

My shoulders fell, my idea souring before my eyes. Maybe this was a stupid idea. Maybe I was an idiot to think I could sell fifty thousand tickets to this fantasy lottery.

We all turned to look at him.

The rest of us O’Sullivan boys stared at Darren. Then at each other.

To celebrate the release of The Irish Lottery I’m giving away an Amazon GC on my Facebook Page.

Have a Merry Christmas! May Santa fulfill all your wildest desires 😉

Prince Grayson.
Heir to the British throne.
Sexiest man I’ve ever laid eyes on.
For some strange reason, he wants me.
I can see the red-hot lust flaring in his eyes when I near. Can feel the thick, long evidence of it when he presses up against me.

One week.
No strings.
Just unbridled, wild passion with a future king.

Except he has one condition.

He won’t give me what I want unless his two bodyguards join in.

Warning: This is a sexy-as-sin, reverse harem romance. Can you handle three huge alpha men focused on her pleasure and taking it all the way?

It’s Grayson and my first Christmas together alone on our own private island. Or so I think…

When I return from the beach, I find the front door ajar. Waiting for me are three masked men with a dangerous and sexy surprise so fucking hot it’ll melt my bikini right off.

Special release price of 99c
(or FREE with Kindle Unlimited)

Grab your copy of Royally Screwed!

Help me to share my Royally Screwed release on FB for a chance to WIN a $50 Amazon GC!

I can’t wait for you to meet Magnar, Jace and X!

Once you’ve read it, please, hit “reply” to this email to let me know what you think! 🙂

Five years I’ve been kept under the control of Ireland’s most vicious gang leader. Now that I’m eighteen, he’s forcing me to marry him. I’d rather die a thousand deaths.

I escape to the only place I can be safe — home of my captor’s biggest rival, the Irish Kings.

There’s X, the living weapon with a haunted past. His vicious touch helps release all this anger in me.

Jace, the teddy bear with a warrior’s heart. His melodic Irish brogue is a balm to my soul.

And Magnar King, their intimidating leader. Whose eyes flare with hunger when I’m near, yet backs away like I’ve burned him when we touch. He doesn’t remember me. But I remember him.

They’re all so different. But they all make me feel safe. They awaken needs in me—strange needs.

I want all of them.

But I just might need all of them to heal.

Have you entered my FB Release Giveaway?

Help me to share my upcoming My Irish Kings release on FB for a chance to WIN a $50 Amazon GC and some sexy and delicious goodies!